With any great conference comes a great Twitter Feed.  This post highlights some of the best tweets of Day 1 of the conference from a range of the sessions attended.  From Michael Stelzner's opening keynote about the state of Social Media Marketing in 2013 to the insprational closing keynote about how to “Fascinate” from Sally Hogshead, it was a day jam-packed full of takeways, great networking and fabulous content. 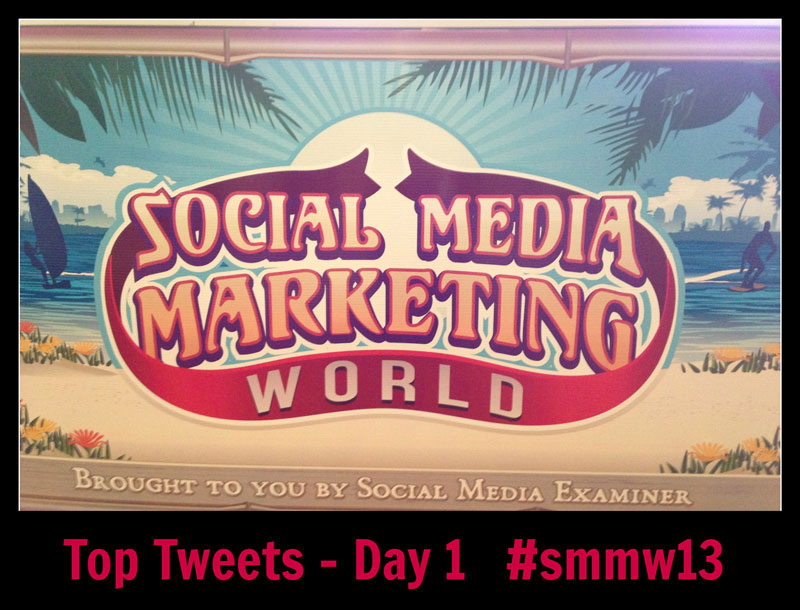 As Day 1 of Social Media Marketing World took off, so did the Twitter Feed.  The tweets being posted were stellar. The content was King, and its Queen was the tear-injucing belly laughs that came from speakers like Marcus Sheridan, Brian Carter and Sally Hogshead….as we sometimes tweeted through watery eyes and uncontrollable giggles.  Fast paced, the Twitter Feed was a 140-character-esque summary of the best bytes of the day. Unlike my usual posts, I am going to let the Tweets do the talking today. Enjoy!

Hats Off to Michael Stelzner for pulling off an amazing seminar. His Keynote had every one of the 1100 attendees excited about the future of Social Media with the mindblowing statistics he presented about the lead up to here, where we are at, and what marketers will be focusing their social media efforts on in 2013.

Podcasting is the HOTTEST thing in 2013. Period. @mike_stelzner @smexaminer #smmw13

Blogging is the #1 social media tool marketers want to learn more about via @mike_stelzner. It's all about owned content. #smmw13

Mari Smith presented to a packed room on 10 Ways to Improve Your Facebook Reach ”¦.and the Tweetables filled the Twitter Feed.

RT @marismith: Content is KING, but engagement is QUEEN and she rules the house!! #smmw13

Jay Baer was brilliant – as expected – his engaging presentation on how to Create Customers for Life had us reaching for our iphones to share the nuggets of wisdom!

The future is having a marketing plan for each piece of content you create. You have to market your marketing! @jaybaer #SMMW13

Mr Duct Tape Marketing himself, John Jantsch gave a compelling case for building your online presence the right way and lots of how-to's that again, filled the Twitter feed”¦

RT @ducttape: The problem with content is not that you don't have enough, it's that you have too much – su.pr/27GGcO #SMMW13

Mitch Joel had brands thinking about how they can keep up with fundamental shifts in business with questions like this:

Is your brand relevant enough that your customer would put your icon on the home screen of their smartphone? – @mitchjoel #SMMW13

Want to succeed in #socialmedia? Stay positive or just shut up! If you can't add to the conversation, stay out of it. – @guykawasaki #SMMW13

Joe Pulizzi had everyone going back to the basics and why we need to think about content first before everything else – and some great tips for developing your content strategy:

Focus not on the content, but on the needs of the audience. @juntajoe #smmw13

Jason Miller had this to say while having everyone think about whether their social channels are lead generating:

“A blog is the rug that ties the room together.” #smmw13 #lebowski @jasonmillerca

Agreed: “If you're not on every channel, you're missing an opportunity.” @jasonmillerca #smmw13

”¦and LaSandre Brill (Cisco) and Brian Ellefritz (SAP) had some great advice for B2B Businesses on Social Strategy:

You have nothing to lose by trying different social campaigns or channels. #B2B #SMMW13 @lasandrabrill @brianellefritz

“We're in the content and media business now” – @brianellefritz, with respect to social presence #smmw13 #sap

Funny Man and Author of “The Like Economy”, Brian Carter had some brilliant insights into using social advertising for leads and sales.

“No matter how many years you've been in marketing, you don't get better at guessing. Test!” – @briancarter #smmw13

“If you have an idea for a Facebook Ad and you don't create 5-10 versions of it, you're probably not doing it right.” @briancarter#SMMW13

Ric Dragon set off the Twitter Feed with some Tweetables about Community Building in the Digital Age”¦.

Social proof: Individuals watch those around them and follow suit. Brands can leverage by activating trendsetters. #SMMW13 @ricdragon

while Kyle Lacy had everyone thinking seriously about Mobile”¦and other emerging Social and Digital Trends that we simply can not ignore!

It's not Facebook itself that is the future, it is mobile. -@kylelacy #smmw13

Derek Halpern did exactly what we expected him to do – mess with our heads! With his brilliant combination of sales, marketing and conversion psychology and yes”¦..academic research people”¦.(how does he manage to make that topic engaging”¦seriously”¦how does he pull it off)”¦.anyone that ignores Derek is not interested in getting leads and sales!

Never tell your customers how they feel. Tell them a story & let them have their own feelings. @derekhalpern #smmw13

What stands out gets remembered. What blends in gets ignored. – @derekhalpern #SMMW13

Douglas Karr, Justin Levy (Citrix) and Waynette Tubbs (SAS) had plenty for the Twitterfeed with their session on how Brands can use Blogs to Grow their Business:

If you start a corporate blog, make sure you get the search & content teams on board. Blogs are a big boost for search. @justinlevy #SMMW13

We do not see our blogs as push marketing. It's a brand humanization effort. #smmw13 #bigb2b #Citrix @justinlevy

Mr Rich Brooks not only showed everyone how to turn Fans into Customers, but he did it with the perspective of someone who is not only a Social Media Expert”¦but someone who walks the talk and gets results in his own business for clients.

“Create a link that begs people to find out the answer. Create a little mystery” @therichbrooks #smmw13

Karaoke Queen and Inbound Marketing Expert Rebecca Corliss (from HubSpot) talked about how to Generate Leads with Social Media – and if the Twitterfeed was anything to go by, her session was full of Tweetables”¦.

Get your marketing ready for lead generation: what is your honey to attract the bees? -@repcor #smmw13

With so many great sessions on, I missed the brilliant Steve Spangler, but I have it on good authority that his session was explosively engaging – a mix of science and marketing insights from the man who became a YouTube Sensation with his Science Experiment Videos:

”¦while Nichole Kelly had some great wisdom about delivering measurable results with Social Media:

There is no doubting that the Sales Lion is one of the best Dang Speakers there is”¦. and one of the funniest. Every sentence out of this man's mouth was either a brilliant piece of advice about how to Build a Business Blog that generates leads and sales”¦.or to Laugh-Out-Loud. Belly-Laugh Funny and crammed full of takeaways:

Love being able to hear @thesaleslion while in the adjacent conference room. LOVE his energy! great speaker #SMMW13

From @thesaleslion at #smmw13 : Content is the greatest sales and trust-building tool in the world. Period.

Carrie Kerpen (with Amy Myers and Amanda Sheldon) talked about creative ways to benefit from Facebook. And there were plenty of tweets to tell us all about it!

“You have to love your community. They can feel it and sense it.” – Amanda Sheldon @ams9. #SMMW13 twitter.com/saralnelson/st”¦

“Love your community & be authentic” is what Amy Myers and Amanda Sheldon have learned abt having a community #SMMW13 @carriekerpen session.

And what a way to finish. With the sassy, smart, engaging, funny (yes very funny) and insightful Sally Hogshead. We were all in for a treat as we learned about what it is that makes us unique and fascinating – and how to be remembered for your message and unique style!

What makes you different is what makes people love you. – @sallyhogshead #smmw13

Boring is the kiss of death. Stand out or don't bother. The world doesn't need another tweet, it needs value. – @sallyhogshead #SMMW13

It's not about the number of interactions you have, it's about quality of your interactions says @sallyhogshead#smmw13

And to finish it all off”¦..Brian Carter had the Tweet of the Day:

Twifubukone – the solution is all of our problems. Twitter inside of Facebook inside of a phone. Haha. @briancarter #SMMW13

And a bonus! Jason Keath from Social Fresh kindly shared the real Top Tweets of the day with us – not surprising Mari Smith was the winner!

Guess who had the most retweets today from the #smmw13 conference? Yup, @marismith =) twitter.com/socialfresh/st”¦

Were you at Social Media Marketing World? What did you think? Be sure to click on the links on the Tweets above to follow the wonderful Peeps that took the time to share their takeaways. What was your favourite session, tweet, quote, takeaway? Leave it for us to share in the comments below!