If you have been paying attention you would realize that Twitter is becoming more and more visual as a social platform.

Images on Twitter not only get retweeted more, but photos, graphics, slide presentations, videos and GIFs grab attention on this traditionally text-based social network.

It is well documented that images on Twitter get retweeted approximately twice as often. Dan Zarrella (the Social Media Scientist) did extensive research to prove it and let's face it, images on Twitter catch attention. There's no doubting it.

Want the Skinny about Images on Twitter?  Buffer's mega-article explaining the stats will motivate you! Buffer quotes research by people like Dan Zarrella  as well as their own research into the use of Twitter.

Click here or click on the image below to read the full article. The team at Buffer include great tips for how to leverage the power of images on Twitter – this post was released after images began to show innately on the newsfeed, and is still highly relevant! 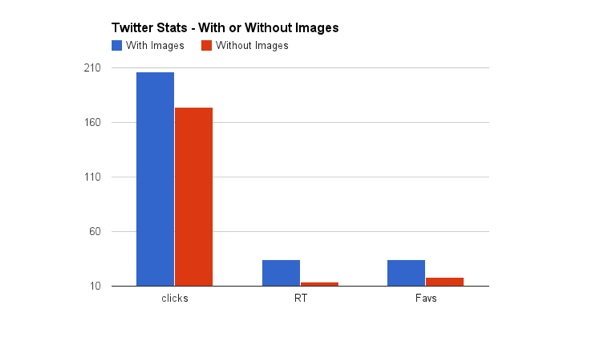 In summary, the team at Buffer found that Tweets with images get more Clicks, Retweets and Favourites. You have to love that!

So let's jump in and look at some ways that you can leverage the power of images on Twitter:

Let's start with the easiest first.  If you have a blog and you have images on your blog, you are missing a whole bunch of free marketing if you don't set up Twitter Cards.

I won't reinvent the wheel – Kim Garst produced an awesome article about how to set them up, so be sure to check it out.

In the example above, all Social Media Examiner had to do was set up the Twitter Cards – now whenever anyone tweets their article, the image and description goes with it.

Don't miss the opportunity for others to do your marketing for you!

If you want the tweet to show up natively in the Twitter Feed, I have a tip for you. Size it to fit the preview image exactly. Here are a few images that I posted during Social Media Marketing World last year that were “sized” to suit the Twitter Preview: 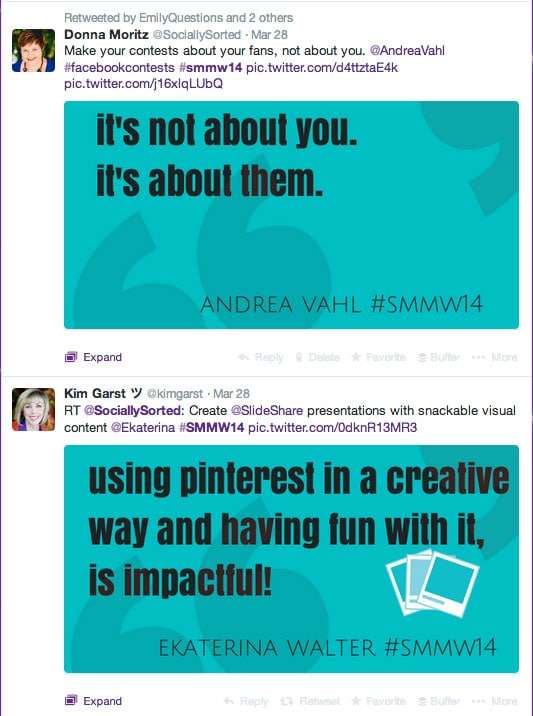 Quick Tip:  The images above were created on a Canva template. I would keep a tab with the template “open” on my laptop after creating the first image, then when I heard a great quote from a speaker, I just had to change out the text + add images to create another quote image – Voila!

It's super easy to be responsive and create original content quickly!

By using a template that is sized perfectly to Twitter you can easily create a series of images to post at a live event (or at any time!).  The templates worked so well in the above example I was able to post them while the speakers were still on stage.

Now…I could give you the dimensions, but let's face it, they often change. Instead,  I'll give you something better.  Go to Canva – and choose their Twitter Template …the template is the best size for Tweet sized images.

Sometimes it is effective enough just to change out colour, font or background. Peg Fitzpatrick is a wizz at making shareable images. I watched Peg create these speaker quotes at an event we were both speaking at recently. She came prepared with templates ready to go – each with a different background colour! 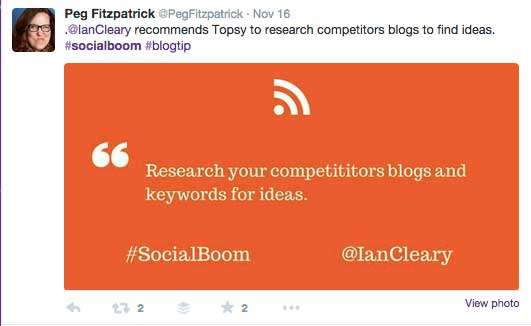 All Peg had to do was make a few clicks and add/change text and background colour and boom – new images in just seconds: 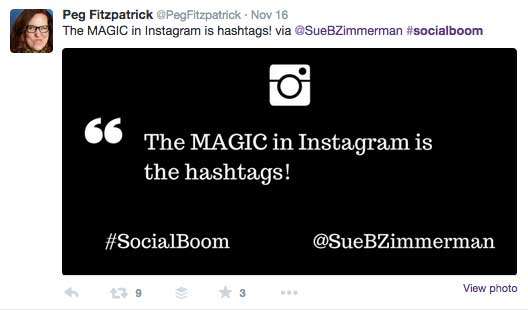 #3  Pre-prepare your Tweets for Live Chats

When it comes to having your tweets stand out, the bar has been raised people.  Raised!  …in a super fun way.

I had a few minutes to spare last year and I dropped by #BlogChat. I love doing Twitter Chats or “Tweet Ups” and I wrote about them here.

Basically it involves a group of like-minded people getting together to chat under a particular #hashtag on a common topic of interest at a regular weekly time.

There is often a guest user and a moderator who adds questions and helps the guest respond and replies to some of the questions or topics.

The nature of Twitter means that these chats become very busy under the hashtag feed, with a lot of conversations going on. Enter Mr Problogger,  Darren Rowse. (by Mr Problogger, I mean that Darren founded Problogger, one of the most successful site about blogging).

Darren was the guest “blogger” at this particular #BlogChat.  Oh my.  Darren came prepared. Here are just 2 of a dozen or so visual tweets he prepared earlier: 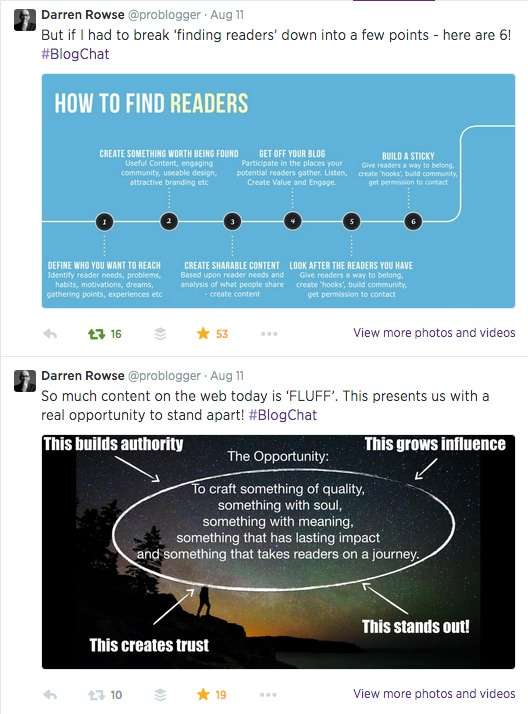 Darren's tweets stood out. Got noticed. Drove the conversation. Helped people to follow along.

If you are holding a tweet chat or event, and you are a speaker or guest, consider pre-preparing some tweets that will start the conversation.

Even text based tweets will impress your guests but if they include images, you will blow the participants away.  And you may just save your hands typing so much as, you know what they say – a picture tells a thousand words!

Savvy brands are recognising the power of Images on Twitter. When I want to know what works, I often visit a few key B2B brands that I know do “social” well.

Let's face it, if a B2B brand can make social work with what could be considered boring content, then there's hope for the rest of us to do it right, isn't there?

So I turn to brands like General Electric to see what they are doing. And guess what?  Their Twitter Feed is very image-centric:

Here's just a taste, but please, click on the image (or click here) and scroll through their feed). Note all the pretty pictures?  Most of their posts are visual:

General Electric get it!  They would not be posting this way unless it impacted their Retweets and engagement, trust me.

Check out these brands too:  HubSpot and Constant Contact. When you want to know what works, watch what these guys do (on any platform) – especially when it comes to visual content. 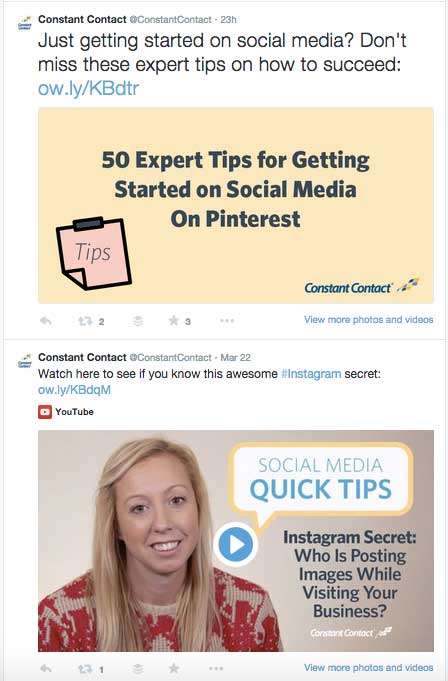 Constant Contact post a lot of video as well as images, photo headers for blog posts and behind the scenes photos of their team. Again, watch closely what these guys do on social. They “get it” too!

There's one thing that stands out to me – it's a personalised tweet. I don't have an issue with automation for the sake of sending out great content from your own blog or especially others you want to promote .. but when it comes to engagement or sending a personalised tweet, you just can't automate it.

One type of tweet I have noticed some “savvy” creative approaches to lately, is the thank you tweet. This might be for a retweet or to follow up on a meeting or just a thank you for a follow – when people that go the extra mile to say thanks with an image… it really stands out on my newsfeed.

Here's an example of a clever “thank you tweet” for a an attendee at a webinar I did recently:

Now as with all good things, automation can come along and ruin it. I have noticed a lot of generic thank you tweet images lately, but Krithika, in the image above “gets it”.  She personalised her tweet so I knew that it was just for me – by mentioning my webinar she attended, this tweet became super personalised.

And it stood out on my mentions feed – because it contained an image. There are 3 ways this tweet is super personal, over and above the actual image:

It can take a little extra time to create these images to tweet, but it's worth it when it comes to standing out.

Take George's example below to thank me for following. Again, super-personalised while leveraging the power of visual content to catch my attention:

How can you personalise your tweets?  If there is someone in your industry you want to catch the attention of, consider using an image tweet.

Do you love visual content on Twitter? Do they stand out for you and do you use them yourself? Leave a comment below and tell me which of the 5 strategies you are considering implementing in your own Twitter Strategy. 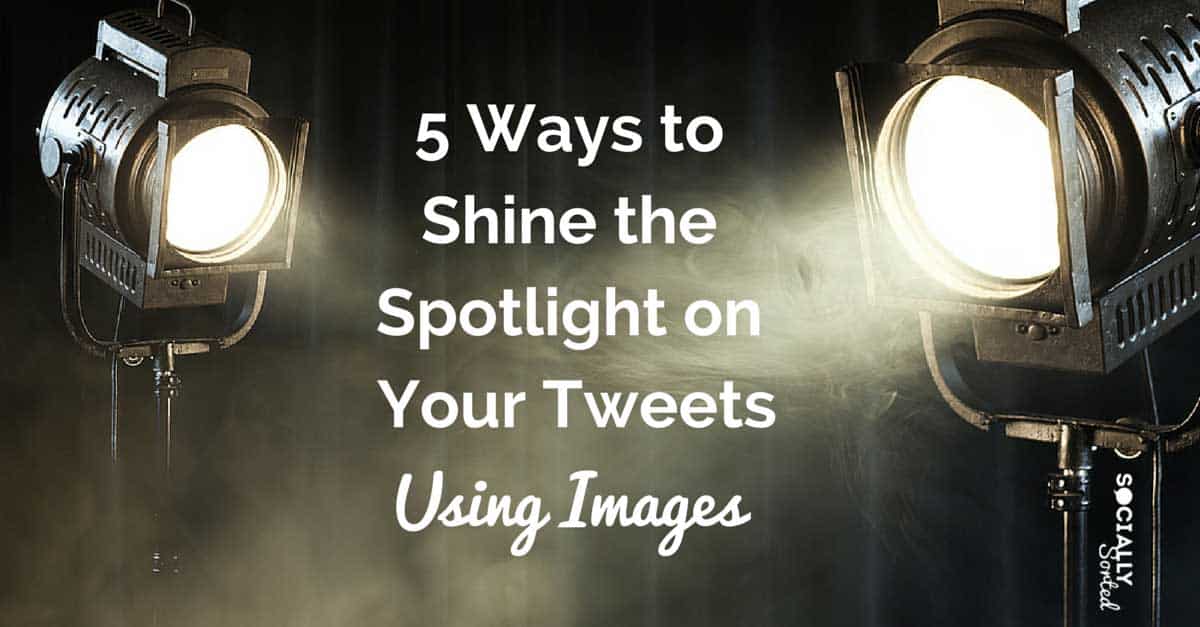